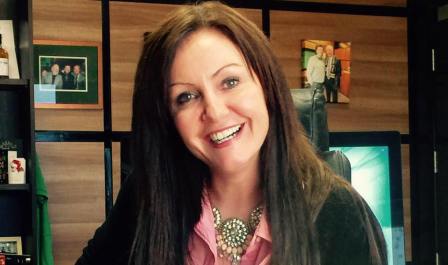 MONIQUE MCADAMS, chief executive of East Kilbride Community Trust, insists a new stadium in East Kilbride will bring a host of economic and social benefits to the town.

The Hairmyres woman has spear-headed the charity’s push for a large community venue since the Trust opened the 650-capacity K-Park venue in Calderglen back in 2010.

What is currently being proposed for the new site in Langlands would see a stadium with a capacity of 4000 and Ms McAdams told the News it’s not just football that will be boosted by it.

“A community stadium would have a positive effect in so many ways,” she said.

“If we get the go-ahead from South Lanarkshire Council, local companies will benefit from their tradesmen being employed and local materials will be purchased to enable
the build.

“The employment that will be created from the building process alone will be welcomed within the community and that’s before opening our doors to the public as a functioning facility.

“The Trust was set up by local people who want to give back to their community.

“We have been trying to donate millions into our home town but have so far been unsuccessful with this project.

“It would be wonderful for this vision of a community stadium that would create employment, provide a needed proven resource and put more money into the East Kilbride economy.

“It would give our youngsters a place to go, join in and see home-grown talent develop.

“Many sporting spectaculars would take place in the stadium as well as family fun days and charity events. At present we currently help more than 1000 people a week locally.

“Just think how many more people we would be able to support if this project comes to fruition.”

In February, East Kilbride FC – one of the parties who would benefit from the new stadium – were forced to play a lucrative Scottish Cup match against Celtic outwith the town.

Ms McAdams was left frustrated as the match was moved to Airdrie and the town missed out on hosting the match.

She believes this proposed stadium is needed to ensure local fans aren’t left disappointed if East Kilbride are due to host another big game in the future.

She said: “When EKFC recently drew Celtic, it was sad for East Kilbride that the game had to be taken outwith South Lanarkshire due to lack of facilities.

“Airdrie got the benefits that should have stayed within East Kilbride.

“It is the only town of its size without its own stadium.

“People in East Kilbride care about this issue and are fed up being the poor relation in South Lanarkshire.

“They deserve to have this facility and we are determined to give the community what they want.”

EKCT’s K-Park Training Academy has proved to be a popular football venue for teams throughout the town since it opened.

But with that facility growing in popularity, the Trust believe a new venue is needed to cope with the demand.

Ms McAdams stressed: “K-Park is literally fit to burst at the seams with over 40 teams training there and over 40 games being played each week.

“The footfall at this facility is approximately 300,000 a year and we could fill the pitch slots three times over every week.