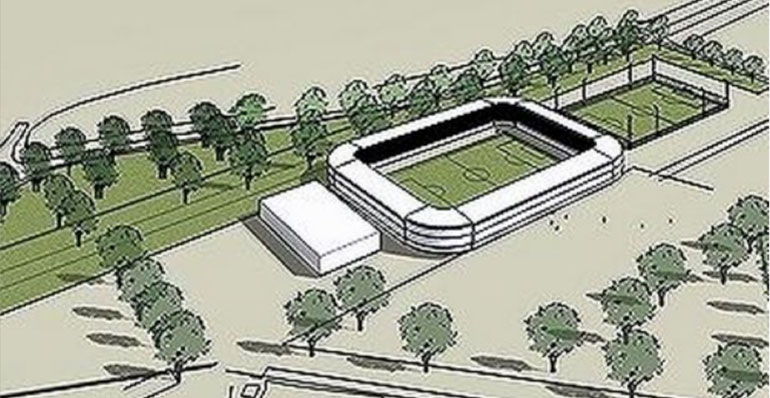 There was a growing tide of support for the ambitious £17million football stadium and sports hub this week after the News revealed the proposal was in jeopardy after three years of failed negotiations between East Kilbride Community Trust and South Lanarkshire Council.

An artists impression of the Langlands proposal

Community support is growing for a charity’s plans to build a state-of-the-art football stadium and sports hub.

The £17million proposal for vacant land at Langlands is in jeopardy after three years of failed negotiations with South Lanarkshire Council.

Despite the jobs and the community facilities the proposal would bring to the town, East Kilbride Community Trust’s offer of £175,000 for part of the eyesore site has been rejected by council bosses.

The land required by the charity, is a small part of the site earmarked for the long-abandoned plans by Rolls-Royce to relocate to Langlands.

The council say the offer submitted by the charity did not meet the conditions attached to the site by the European Commission, from which the authority received a grant of almost £1.9 million to prepare the site.

But Trust chief executive, Monique McAdams said: “Despite the fact this piece of land has been lying derelict for years and, as far as we are aware, no one else has shown any interest in it in the seven years since Rolls-Royce scrapped their plans, our offer has been rejected.

“We believe that any other local authority would have welcomed and worked with us on our proposals, which would bring so many benefits, in terms jobs and the well-being of the town and at no cost to the public purse.”

“The charity is prepared to pay for part of this publicly-owned land, which is arguably unprecedented for a project such as we are proposing for East Kilbride, yet we seem to be getting nowhere with South Lanarkshire Council.

“The more money we have to pay for the land, the less the charity has to spend on the many worthwhile community projects we are working on.”