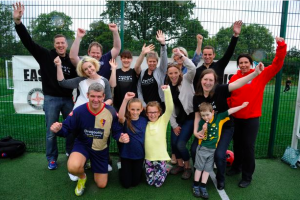 One of the highlights of a fun day at the town’s K-Park on Sunday was an action-packed football tournament … but the winner was blood cancer charity Anthony Nolan.

For in addition to raising vital funds for the charity, the East Kilbride Community Trust event helped recruit dozens of donors to its register of stem cell donors.

Throughout the day young footballers taking part in the tournament as well as visitors provided the quick saliva sample to become potential life-savers.

If a match is found their stem cells could give the gift of life.

Among them was 26-year-old Gary Henderson, from Whitehills, who plays with EK Milan.

“Joining the register just seems like a really good thing to do and hopefully a lot of people will do it today – there’s no reason not to.”

Amy Bartlett, of Anthony Nolan, was at the day.

She said: “We have had a great response here at K-Park and we can’t thank EKCT enough for organising the event.

“As well as more people joining the register, it’s great to have the opportunity to raise awareness and show how easy it is to join.”

Also attending the day were East Kilbride’s Peter Hickey and schoolgirl Katie Currie (12) who have both undergone lifesaving transplants. Katie was there with her 10-year-old sister Libby and mum and dad Siobhan and Neil.

The youngster was diagnosed with acute lymphoblastic leukaemia when she was three years old, only for the disease to return two years later. She finally beat the condition after a bone marrow donor was found by a campaign led by Fife-born Hollywood actor Dougray Scott.

Peter (53) was diagnosed with non-Hodgkin Lymphoma in 2004 but is now in remission following a successful bone marrow transplant.

Chief Executive of EKCT Monique McAdams said: “Peter and Katie really inspired us to become involved with Anthony Nolan and we are delighted to be supporting such a worthwhile charity.”